The sous vide cooking technique is and has been taking the culinary world by storm since its inception in France in the early ’70’s. Since that time it has been rolling across the “pond” to our shores first in industrial and commercial kitchens over the past few decades, but much more recently it has made its move into the home kitchen.

Known for its ridiculously precise temperatures and consistent cooking, metaphorically speaking it can make a silk purse from a sow's ear. A hallmark of the technique is taking traditionally tough beef cuts and transforming them into almost spoon tender delights. Not only making the customer happy with a perfect plate but additionally offering the chef a better financial bottom line and a far more relaxed kitchen.

As good as it is with proteins, vegetables can get the sous vide treatment as well offering up intense vegetable flavors with smooth, tender textures that haven’t been diluted or overly softened in boiling water or steam. And because sous-vide foods are packaged under vacuum and sealed, they enjoy a particularly long shelf life.

Pectin is a polysaccharide (a substance whose molecules consist of a number of sugar molecules bonded together), and vegetables are chock full of it. Pectin is what holds plant cells together, and if you're into canning your probably already familiar, it’s used commonly as a thickening agent. Pectin is what makes jelly have that well, jelly-like consistency.

But here is the rub, pectin must reach a temperature of 183°F to begin breaking down to do its thickening thing. Where meat proteins typically reach their maximum physical change in the bag somewhere between 140-165°F. Red Meats like those lower temperatures to achieve the varied array of pinkness in the flesh as well as retain juiciness.

So what in the name of Escoffier is one to do? Well, you cold cook the vegetables and meats, wait for it, almost there, separately!

Which brings us to my “sous vide-sorta” version of a New England classic, Red Flannel Corned Beef Hash. This recipe was put together to showcase everything we have touched on here. Corned beef brisket cooked sous vide at the low temperature of 140°F for 48 hours is shockingly tender and juicy. The beets, the vegetable that gives red flannel hash its delightful color are cooked separately at 185°F along with the carrots and potatoes and emerge beautifully tender, colorful and bursting full of intense unadulterated vegetable flavor. Finally, you have vegetables and meat living together in perfect culinary harmony resulting in a spectacular dish that you can immediately serve from the skillet but even better can be bulk or individually portioned and vacuum packed for use whenever it's needed.

• 5 eggs sous vide or as needed

1. In a heavy bottomed cast iron or carbon steel skillet over medium-high, heat approximately 4 tablespoons of the tallow.

2. Add the onions, potatoes, beets, carrots and corned beef to pan and season with salt and pepper.

3. Toss to combine and cook until heated through about 3-5 minutes.

4. Add the stock and parsley and continue to toss the mixture until the stock totally evaporates.

5. Continue to toss and begin pressing the mixture into the pan so that the hash begins to crisp about 3-5 minutes.

6. Add the heavy cream and finish crisping the hash until the cream evaporates.

7. Serve the hash immediately in desired portions topped with one the sous vide egg per portion.

8. Alternatively, let the hash cool and chill in the refrigerator.

9. Vacuum pack using VacMaster bags and a VacMaster chamber or a VacMaster suction machine in bulk or in individual servings to be refrigerated or frozen for later use. 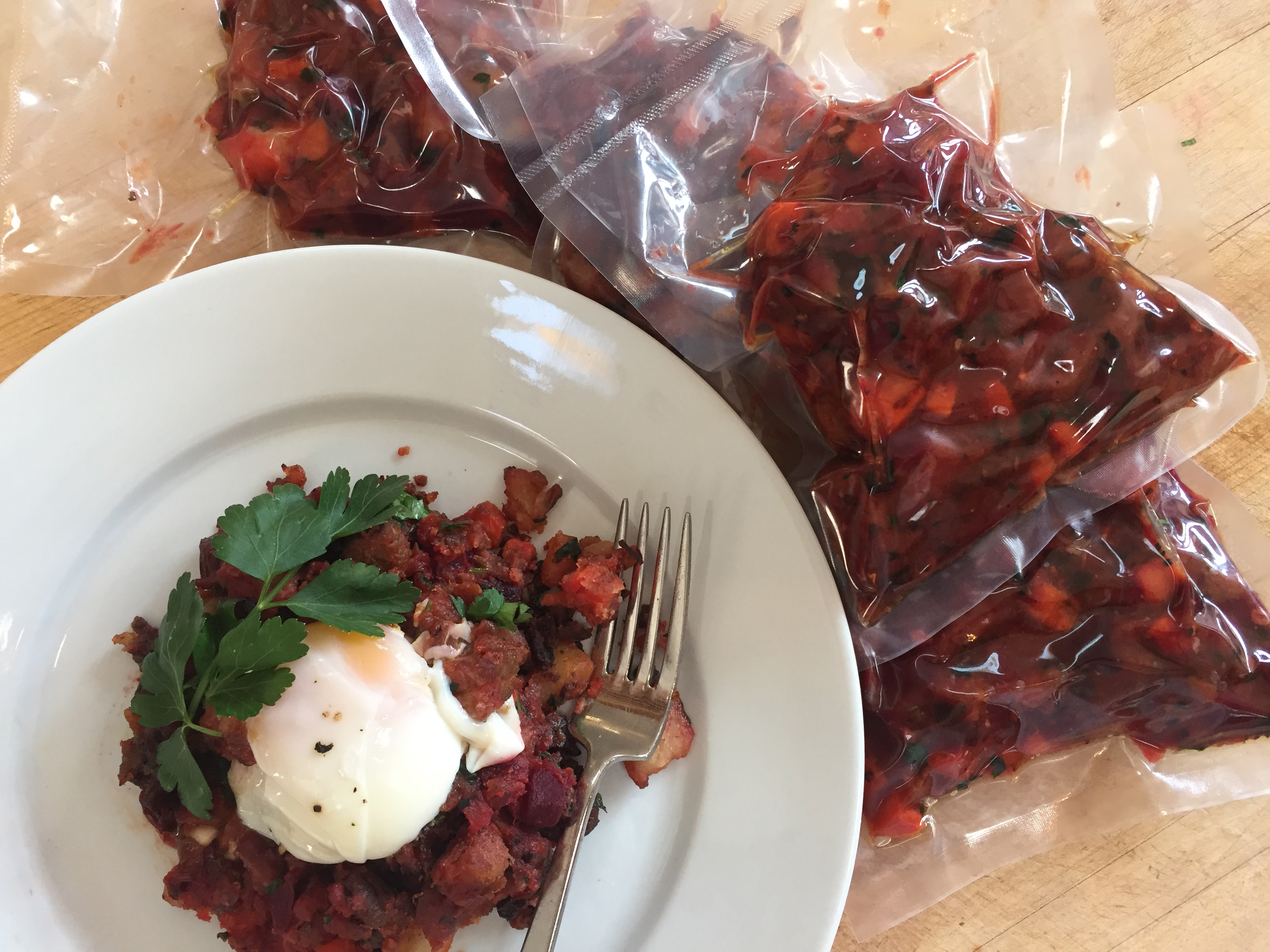